A car accident that happened Tuesday, February 11 resulted in no fatalities, partly due to a Missouri surgeon who rushed to help. 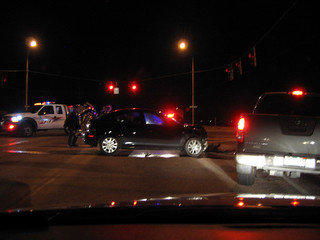 Andrew Collette, a southwest Missouri orthopedic surgeon, had worked in Joplin for the Freemason Health System for the last six months. He and a colleague, Angie Thomure, supervisor of physician operations, were driving together on Missouri Highway 43, after Thomure had introduced Collette to a group of doctors in Seneca, when they came upon a recent crash.

Collette observed that several of the vehicle’s occupants were trapped inside the car, while one girl had managed to escape. He joined a teenage boy who had extricated himself from the vehicle and was attempting to pull others from the car. The car was still running and gasoline was leaking out. Collette went to the 10-year-old girl who was crying near the wreck and sent her to wait with Thomure while he helped free the trapped accident victims still in the vehicle.

Then Collette worked with the teenager to pull the 49-year-old Joplin man, who had been driving, out of the vehicle and then free another teenage boy. But first he turned the vehicle off. Collette said

the car was making some weird clicking sound, and there was gas and other liquids coming out.

They grabbed the windshield and were able to pull it free in order to help the two trapped passengers climb out.

According to the Missouri State Highway Patrol, the car had traveled off of the roadway, crashed through several mailboxes and then had gone over a steep embankment. The accident report states that the 49-year-old driver sustained moderate injuries, and the two teenage boys and the 10-year-old girl only suffered minor injuries.

When asked about the incident Thomure said

He did place his life on the line when he stepped back there to help those people in that car. That makes him a hero in my book.

Thankfully, because of Collette and the teenager’s actions no one was seriously injured or killed in the accident. The accident is still under investigation and the cause of the crash has not been revealed.

Keeping an eye out for accidents is very important, especially in the winter. Not just because someone might need help, but also because you may need enough time to slow down and not cause another accident yourself. Slippery roads, poor visibility, and backed up traffic have been causing many accidents this winter. It pays to be extra cautious, take your time, eliminate distractions, and keep an eye out.

If you or a loved one is involved in a car accident, it is in your best interests to contact a car accident attorney as soon as possible. At The Hoffmann Law Firm, L.L.C. we have over 20 years of experience and know how to help you deal with insurance companies, pursue compensation from the responsible party, and guide you through the legal process as you and your family can focus on recovery.

Uber Lawyer Uber carries third party liability coverage which pays up to $1 million for injuries and damages. This insurance also protects you, the passenger. What Can You Expect To Get If … END_OF_DOCUMENT_TOKEN_TO_BE_REPLACED