Rear-end car accidents can do massive amounts of damage to both your vehicle and the passengers inside. 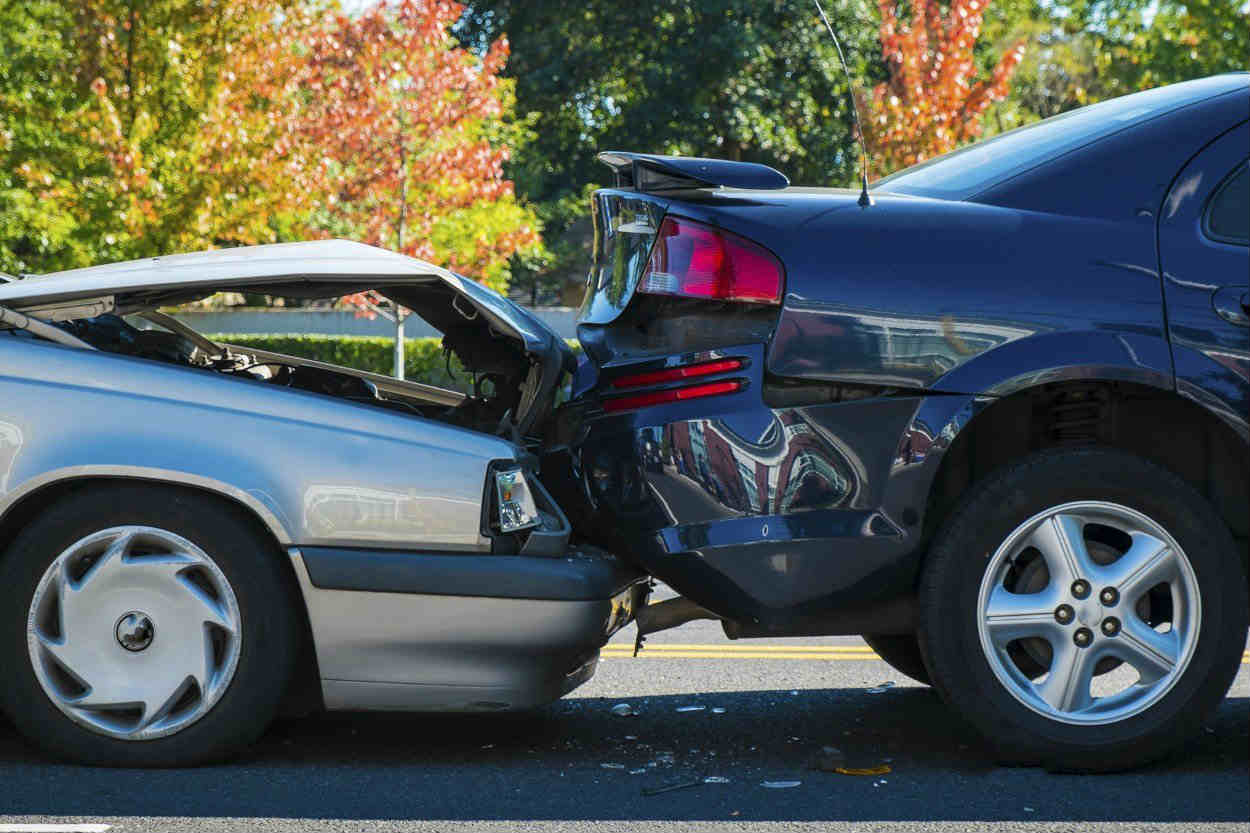 Rear-end collisions are among the most common types of motor vehicle accidents and are often a cause of serious injuries. The National Transportation Safety Board estimates that more than 2.5 million rear-end collisions happen every year in the United States. The effect of a rear end collision while standing still can be much more severe on the muscles and bones than any other type of car accident.

Injuries Resulting From a Rear-End Collision

The occupants of a rear-ended car often experience whiplash, causing the neck and the head to snap forward and backwards at great speed. This whiplashing can cause damage to the spine and the disc of the vertebral column in the neck area. The injury can be extremely painful, which may take some years to resolve completely or may last for a lifetime. The most important thing to do after a rear-end collision is to visit a hospital for a complete check-up. It may happen that you do not feel any pain immediately after the injury and that you may feel that you are alright; however, most of the symptoms of a ruptured disc are felt after a period of time. Immediate medical help should be sought so that any permanent damage can be avoided.

How the Swedish Study Was Conducted

Using motion sensors that are now standard equipment on most cars, Swedish researchers focused their attention on rear-end collisions and the extent of damage that they caused. The motion sensors were able to tell them how fast and which direction each car was going at the time of the crash. They were also able to determine whether the cars were speeding up, braking, traveling at a consistent rate, or at a full stop at the time of impact.

What the Research Found

After examining the data and comparing it to the car accident victim’s medical reports, the researchers discovered a direct correlation between speed and the severity of a whiplash injury. More importantly, it showed that if the driver of the car in back was pressing on the gas at impact, the risk of there being a permanent neck injury dramatically increased. The occurrence of life-long whiplash symptoms was much lower when both cars were traveling at the same speed, regardless of how fast that was.

Whiplash is one of the most common injuries resulting from car accidents. The tendons and ligaments that support the neck are strained far past their normal capability due to the trauma of a strong, sudden movement to the head. When you are hit by another car from behind, your body normally reacts by thrusting the head forward and then back violently. It is that violent movement that causes the strain.

For many people, the painful symptoms of whiplash will clear up in a few weeks with some moderate therapy, yet for others, the pain may never dissipate. In fact, it might even spread to the shoulders or cause debilitating headaches. It is this range of symptoms that has perplexed doctors, who often have a difficult time with making a prognosis for whiplash as a result.

Rear-end car accidents can do massive amounts of damage to both your vehicle and the passengers inside. At our law firm, we are quick to fully investigate the scene of your accident in order to properly uncover all of the critical evidence you will need to build a solid case against all negligent parties. We will work with you to recover the maximum compensation so you can pay your medical bills, property damage and other losses you have incurred.

Who Is at Fault?

This past August in the western district of the Missouri Court of Appeals a verdict was upheld that favored the trailing vehicle in a rear end collision case. The verdict was based on the defendants’ admission to hitting the lead vehicle, but that the circumstances did not allow for any other course of action. As the driver topped the hill she was unable to see that the car in front of her stopped, nor was there any way for her to know that there would be stopped vehicles at the bottom of the hill since there were no stop signs or signals on the two lane road. All possible means of avoiding the accident were quickly disproved by the plaintiffs attorney. An oncoming car and no shoulder did not allow for the trailing car to veer out of the way. State trooper testimony stated that the hill was an obstruction to the drivers’ line of sight and that skid marks prove that she did indeed step on the brake as soon as she crested the hill and was able to see the cars stopped in front of her.

There is a rule while driving that is referred to as the ACDA rule, or assured clear distance ahead. Careful drivers know to give themselves ample space from the car in front of them and follow the 3 second rule. There should always be at least 3 seconds between you and the car ahead, or more if bad road conditions exist, such as ice. This should ensure plenty of time to stop if the car in front of you were to brake suddenly.

There are instances though where the lead car could be found at fault. For example they may weave suddenly into your lane on a highway, or enter a road directly in front of you without first checking to make sure there is ample space. In cases such as this the driver of the trailing car should seek the advice of a Missouri car accident attorney. They would better be able to help you determine who is truly at fault.

Other factors to consider when trying to assign blame in these cases are obscured vision that may be caused by darkness or fog, being tired or ill while driving, or taking certain medications. Brake pads that have not been changed recently, driving a car that you are unfamiliar with, speeding, or being distracted are also common factors in rear end collisions. All of these possibilities will be explored in a rear end collision case. That is why it is important to let your Missouri car accident attorney know of any mitigating factors when you present your

Fighting the Insurance Companies for You

After a rear-end car crash, there may be very little damage done to your car. Insurance companies take this as a sign that no one was badly hurt. This is far from the truth of what really happens. Rear-end car accident injuries can take a long time to fully develop. That is why it is critical to seek medical attention immediately and speak with a knowledgeable attorney right away. We have experience negotiating and litigating with the insurance companies to get our clients the full recovery they deserve.

For dedicated legal assistance with your rear end collision, call (314) 361-4242 or fill out our online contact form. We offer free consultations in all personal injury cases and you never pay attorney fees unless we recover compensation for you.

In a car accident last year. We were hit from behind by another car at 50 miles per hour. I was diagnosed with a herniated disk in my neck and low back. Started with physical therapy and then had to get injections. Mr. Hoffmann was our lawyer. He filed a lawsuit for us and did a great job with our case. I sat in on the depositions and can say this attorney is really good!
-- via Google

by Lindsey Mayer on The Hoffman Law Firm, L.L.C.
My neck and back were in a lot of pain and I had to see a spinal surgeon.

I was a passenger in a car that was rear ended on Highway 40. There was major damage to the car. Everyone went to the emergency room. My neck and back were in a lot of pain and I had to see a spinal surgeon. We looked around and, after reading some great reviews, hired this lawyer. He walked us through the medical treatment and lawsuit. Did a great job and got us a great settlement. Very likable and smooth. Impressive! Our family thanks you!
-- via Google

Cannot find a better St. Louis auto accident lawyer. I got hit from behind and injured. I found this accident lawyer and he walked me through the process. He took all my calls and gave me solutions each time issues came up with the automobile claim and the injury. Great lawyer! Thanks for the help!

by Maxwel Rowe on The Hoffman Law Firm, L.L.C.
Hit from behind in a car crash in St. Louis and used this lawyer.

Hit from behind in a car crash in St. Louis and used this lawyer.  Had neck and back injuries and this attorney helps with the injury case.  Very good lawyer for car accident injuries.  This lawyer is big time and took on the car insurance company with no problem.

by Christian Burns on The Hoffman Law Firm, L.L.C.
Accident on Highway 40 driving back into St. Louis. Impact was so hard the back window blew out.

Accident on Highway 40 driving back into St. Louis. Impact was so hard the back window blew out. Everyone has to follow up with specialists after the emergency room. This attorney handled all of our injury cases and did a great job.

Uber Lawyer Uber carries third party liability coverage which pays up to $1 million for injuries and damages. This insurance also protects you, the passenger. What Can You Expect To Get If … END_OF_DOCUMENT_TOKEN_TO_BE_REPLACED