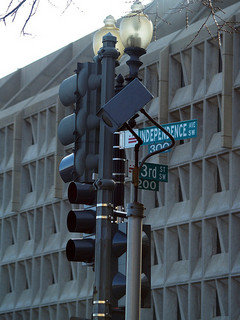 Drivers and the government should be on the same side when it comes to safety.

One University of Tennessee researcher is asking whether red-light cameras installed at intersections are actually making conditions safer for motorists, or whether the cameras are primarily being used to make money.

Professor Lee Han of Tennessee’s civil engineering department, has started a discussion about the red-light cameras and how there is a dilemma which includes balancing the goals of improving traffic safety with using the cameras to generate money. There are 24 states that use the red-light cameras, while 9 states have banned the use of these cameras. The Governors Highway Safety Association has concluded a study which addresses some of these concerns. It took a look at existing data, concluded that it is not clear that red-light cameras actually do promote safety, but notes that using them to make money has become normal.

The big problem here is that if a camera actually does make an intersection safer, the camera then starts to lose money as it becomes less profitable. Han calls this a “dual, conflicting purpose.” As people learn their lesson and develop better habits, the cameras become less self-sufficient, because fewer people are incurring fines, which are used to pay for and maintain the cameras. So then the problem escalates to whether or not the fines should be increased, whether punishable offenses should be redefined, or if people can be tricked into behaving in a manner that will get them fined.

Increasing fines has become standard for some areas that use the cameras, Hall says. “Some play with traffic signals to get more incidences of red-light running. Some added speed enforcement to the red-light camera program over time,” he went on to say.

Some of these strategies include changing the time that a light stays yellow, reducing the time by one second. This will then result in more drivers accidentally driving through the red light as they hurry to get through. This strategy can increase the frequency of this happening by as much as 110 percent.

Additionally, raising the speed in the area around an intersection, means that drivers will need to make more quick decisions. They are already driving faster and then they need to make the split second decision of whether to drive through or stop, creating a “dilemma zone.” The study reports that raising the speed limit by even 10 mph makes drivers 45 percent likely to run the red light.

While these strategies certainly make more money, they also increase the risk of accidents when they encourage drivers to run red lights. The red light programs may have been implemented with the best of intentions to improve safety, but then financial issues arise when these goals are actually reached.

Han says that these strategies must be made known to the public and also wants officials who are in charge of these policies to be made aware of the risks involved. He says that putting traffic light engineers in the position where they have to make ethical decisions like these, is not right.

Drivers and the government should be on the same side when it comes to safety. Both parties should be doing everything possible to avoid causing an accident.

If you have been injured in an auto accident and need help getting the compensation you deserve, contact a St. Louis auto accident attorney at the Hoffmann Law Firm as soon as possible. Our team of legal professionals will fight to defend your rights and get you and your family the compensation you deserve so you can focus on recovering and moving forward.

St. Louis Lyft Accident Lawyer Talk to a Lawyer for Free 24/7 at (314) 361-4242 ::  We Help Lyft Accident Victims Get the Compensation They Deserve An accident with a Lyft driver can leave … END_OF_DOCUMENT_TOKEN_TO_BE_REPLACED