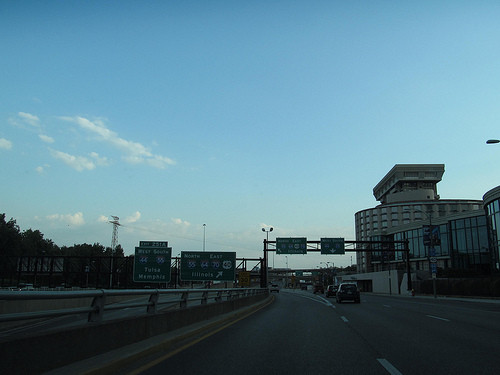 On March 14, 2013, an accident in St. Louis left one man dead, 2 passengers hospitalized, and another driver was arrested.

The victim, a 53-year-old male, was driving a Pontiac Bonneville with two passengers near Branch Street and North Broadway, when his car was T-boned by a Ford Explorer. The driver of the explorer, 41, has not been identified, but police say he was fleeing the scene of another traffic accident, when he caused this one.

According to Schron Jackson, Public Information Manager for the Metropolitan Police Department, the driver of the Ford Explorer had gotten into a minor accident with a St. Louis City License Collector’s vehicle several miles away. The License Collector’s vehicle was side-swiped by the Explorer at 9th and N. Market at around 12:30. The driver of the Explorer then fled the scene of that accident, but the License Collector vehicle driver called the police and then followed the Ford Explorer driver as he got on the highway, exiting at Branch.

The police believe that the driver of the Explorer ran a stop sign as he was going east before colliding with the side of the Pontiac, which was heading north, at the North Broadway intersection by the Old North St. Louis neighborhood.

The two passengers and the driver of the Pontiac were trapped inside the vehicle after the accident. Dan Sutter, with the St. Louis Fire Department, reported that the accident victims had to be removed from the vehicle with hydraulic rescue tools. The driver was pronounced dead at the scene. The front seat passenger, a 62-year-old man, was hospitalized in critical condition. The rear seat passenger, 35, was also hospitalized and reported to be in critical condition.

The 41-year-old driver of the Ford Explorer was treated at a nearby hospital and then released. He was arrested, but his name has not been released.

There were security cameras nearby and police officers collected video evidence in case the cameras captured footage of the accident that could help them better understand exactly what happened.

A St. Louis police officer was injured in another recent accident that happened just before 9:30 PM on a Tuesday in Midtown. A passenger car that was being driven erratically was pursued by a police officer, who was then called to a more immediate situation and had to stop pursuing the vehicle. The erratic vehicle continued on and hit another police car at the intersection of Washington and Compton. The officer in the police vehicle was seriously injured and was taken to an area hospital, where he was reported to be in serious condition.

There were three people in the passenger vehicle that hit the police car. One person fled the scene on foot and the other two were transported to a nearby hospital and reported to be in serious condition. Police have not yet found the third person who fled the scene.

If you have been injured in an auto accident, contact the experienced St. Louis auto accident attorneys at The Hoffmann Law Firm, L.L.C. right away. We will work to protect your rights while holding those at fault responsible for their actions and make sure you get the compensation you deserve.

St. Louis Lyft Accident Lawyer Talk to a Lawyer for Free 24/7 at (314) 361-4242 ::  We Help Lyft Accident Victims Get the Compensation They Deserve An accident with a Lyft driver can leave … END_OF_DOCUMENT_TOKEN_TO_BE_REPLACED