Several recent car accidents in Missouri show how unpredictable sharing the road with other drivers can be and how the carelessness of one driver can impact the lives of many others. 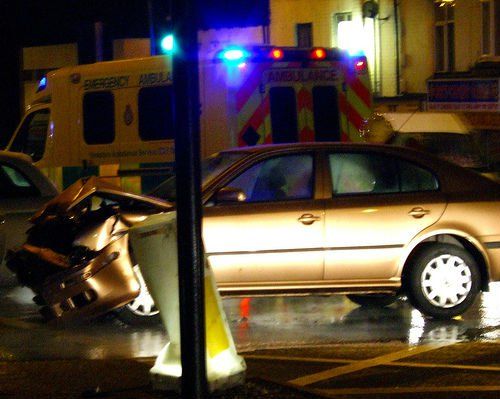 Around 12:45 a.m. last Friday, June 14, in Kansas City, Missouri, two cars were involved in an accident. During the collision, one of the vehicles crashed into a building. The crash happened at the intersection of 12th and Indiana, where one of the cars ran a stop sign. That car was also speeding.

It was Lawrence Bradley’s business inside the building involved in the crash. He said he will never forget the sound of tires screeching, the crash happening, and then he saw the breaking glass as one of the cars crashed through the front window of his business. Several recent break-ins had prompted Bradley to move his handyman business to this new location.

“Not again,” Bradley said. “The reason I say not again is because this has happened before and in the last two years. This building has had cars running up the street into this building speeding like that.” Building inspectors were called in and Bradley was told it was still not safe to return to his business later Friday morning. Recently, the stoplight at that intersection was replaced by a stop sign. It is not currently clear how many people were injured or the extent of the injuries.

In another recent accident, a Dixon man died after his vehicle struck a tree. The Missouri State Highway Patrol reported that the 24-year-old crashed his 2004 Ford Explorer on June 4 on Highway 17 in Miller County. According to Highway Patrol, he was not wearing his seatbelt when he crossed over the roadway, veered over to the left side of the road, and then crashed into a tree. He was pronounced dead at the scene.

In New York, a 17-year-old boy was recently arrested and charged with reckless endangerment and a speeding violation after he caused an accident that involved three cars and injured ten people. The boy, of Ozone Park, was speeding in Queens on Cross Bay Blvd. He was driving over 100 miles per hour when he lost control of the Honda he was driving, crossed over a grass median divider, and collided with two oncoming vehicles.

“It’s amazing no one was killed,” a police source said.

Three of the ten injured were reported to have sustained critical injuries, but were hospitalized and reported to be in stable condition the following day.

Each of these recent accidents shows how unpredictable driving can be and how quickly accidents can happen. You may be driving safely but you cannot be guaranteed that other drivers are being so diligent.

Speeding, distracted driving, and driving while intoxicated are all common causes of accidents. Defensive driving and practicing safe driving habits such as limiting distractions will help to keep you safe and can keep you from causing an accident, but your safety is also dependent on the actions of other drivers. In the event of an accident caused by someone else’s negligence and carelessness, it is important that you immediately contact a Missouri auto accident attorney.

Car accidents can be stressful, cause devastating injuries, and have a real impact on your day-to-day life. If you are injured or if a family member is injured in an accident, contact The Hoffmann Law Firm, L.L.C. We will help to ensure that you do not suffer financial losses on top of your physical injuries. We will work to get you the maximum recovery possible so that you can cover medical expenses, lost wages, and pain and suffering.

St. Louis Lyft Accident Lawyer Talk to a Lawyer for Free 24/7 at (314) 361-4242 ::  We Help Lyft Accident Victims Get the Compensation They Deserve An accident with a Lyft driver can leave … END_OF_DOCUMENT_TOKEN_TO_BE_REPLACED